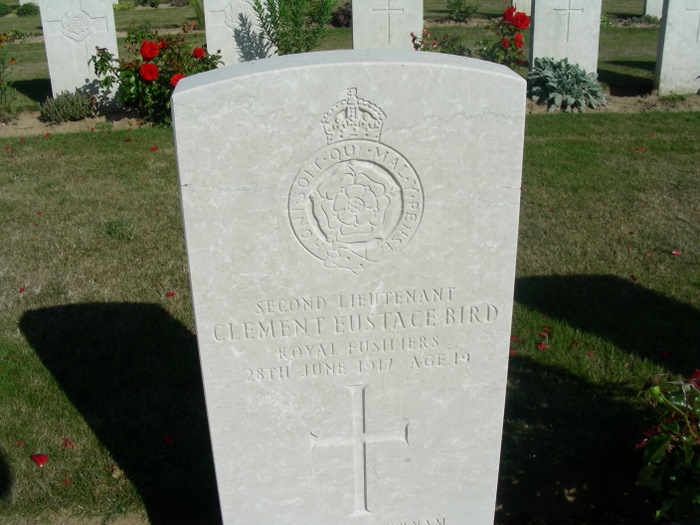 Clement Eustace Bird was the youngest of four surviving sons of the late Henry Bird and his wife, Maud, of Morrab Terrace, Penzance and the third son to lose his life in World War One. He was killed in action on 28 June 1917.

The Bird family endured great tragedy: their first born son, Henry Stavell, died in 1886 at the age of three.  His brother Richard was killed on 25 April 1915 and another brother, Harry,  on 9 April 1917. The only brother to survive was Hubert, who saw 16 months of active service and went on to found one of the largest construction companies in Canada. Clement Eustace Bird was born in Millbrook, Cornwall, on 24 November 1897 and was only 19 when he died at Monchy-le-Preux.

He was a 2nd Lieutenant, 9th (service) Battalion in the Royal Fusiliers (City of London Regiment) when he died.  He attended Exeter Cathedral School then Humphry Davy Grammar School after his widowed mother moved to Penzance.

His three elder brothers had all emigrated to Canada to join two uncles there: perhaps, if the war had not happened, he might have joined them. In fact, aged 17, he signed up on 1 December 1914 and joined the 2/4th Territorial Force Battalion, Devonshire Regiment, and left for India three weeks later on 21 December 1914.

Despite his youth, he quickly attained the rank of Sergeant and gained a commission with the 9th Service Battalion Royal Fusiliers [1] on 16 November 1915 on returning  to England.

As Second Lieutenant  he served with the British Expeditionary Force in France and Flanders from July 1916. He was wounded on the Somme in October 1916.

His unit’s War Diary records that they were occupying trenches west of Guede Court.
“Hostile shelling very heavy all day on front, support trenches and on sunken road also FLEUR. Casualties sustained not quite as heavy as usual. 2nd Lt Bird wounded.”

After two months  he rejoined his regiment but had less than a year left to live. He was killed in the Battle of Arras in fighting at Monchy-le-Preux and is buried in the Military Cemetery there. [2]  Monchy-le-Preux was strategically important to the Allies. The village, east of Arras, was a German stronghold atop a hill in France’s Scarpe Valley. It provided a clear view of the city of Arras and enemy defences in the area. It was captured by British forces on 11 April 1917 but this created a salient – land exposed on three sides to the enemy – which made it difficult to protect.

“Sector quite normal except for C.E. Bird wounded, later died of wounds…”

On his grave in Monchy-le-Preux is a Latin inscription: Requiem eternam dona ei, Domine, et lux perpetua luceat ei (Grant them eternal rest, O Lord, and may light perpetual shine upon them).

His name is on the war memorial at St Mary’s Church, Penzance, and on the memorial at Humphry Davy School.

[1] The 9th (Service) Battalion The Royal Fusiliers (City of London Regiment) was formed at Hounslow on 21 August 1914 as part of Kitchener’s New Army and came under the command of the 36th Brigade, 12th (Eastern) Division.