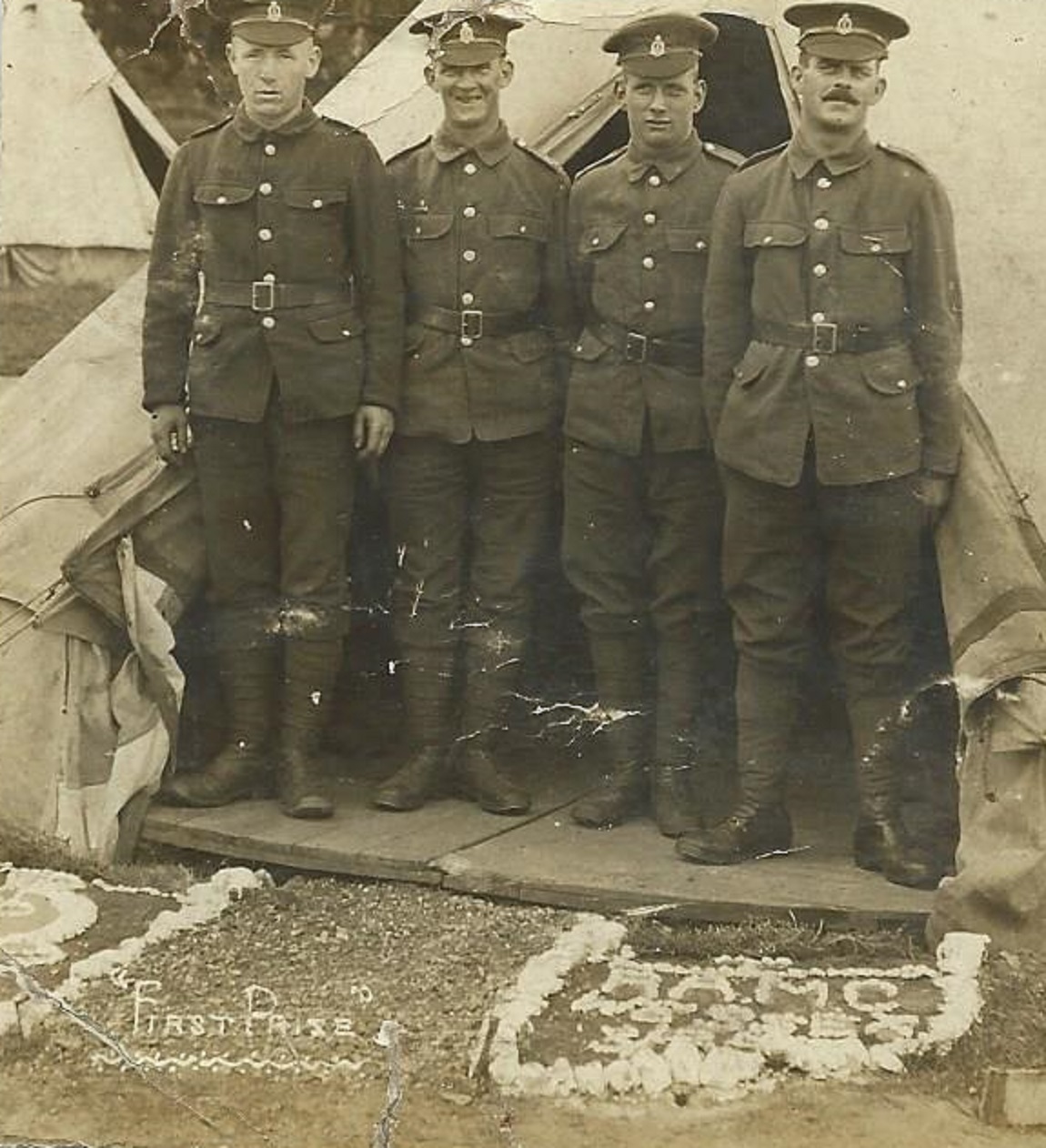 It was wonderful to hear (via Facebook’s Nostalgic Camborne group) from Nancy Renfree who asked about her grandfather William J Wills. She said he was always known as ‘Jack’ and was invalided out of World War One after losing an eye.

It turns out that Jack received an injury in his right eye at the end of October 1915 in action near Merville (northern France). He had been with the Field Ambulance just 11 months.  He was taken first to Number 18 General Hospital at Camiers (on the coast) and then back to Cornwall.

Jack’s story prior to his injury: he was one of the Camborne men who were in the St John Ambulance Brigade at Dolcoath Mine. They joined the 25th Field Ambulance in the Royal Army Medical Corps (RAMC) in 1914 and set out for the Western Front with Dr William Blackwood.

A West Briton report in 1914 mentions Jack as one of these men.

This photo of him (second right), kindly sent by his family, probably dates from this period while the men were at a training camp on Salisbury Plain, soon after they set off from Cornwall.

The sign the men have created says ‘2nd Wessex’: this was a Territorial Army unit that was formed into the 25th Field Ambulance after war broke out. They are standing proudly by their tent and the sign  – the photograph says ‘First Prize’.  We do not know what the competition was – but perhaps the prize was for their immaculate presentation.

Once trained and formally set up, Jack  travelled out with the other men to the Western Front in November 1914. The unit was stationed near Estaires in northern France. And this is where we next came across him.

Apparently he played in the first of three rugby matches organised by the 25th Field Ambulance at the Front, after Camborne Rugby Club sent out a ball in 1915.

In May 1915, well-known Redruth rugby player Jack Solomon wrote back to the West Briton to tell everyone back home about a rugby match that had been played at the Front. Camborne Rugby Club had sent out a ball.   This  match was played sometime before 10 May 1915 between Cornish and Devonians in the 25th Field Ambulance.

“The Devon boys managed to beat us by two tries, but we hope to have our own back next week.”

The Cornishmen did have their own back the following week. To read more, click here.