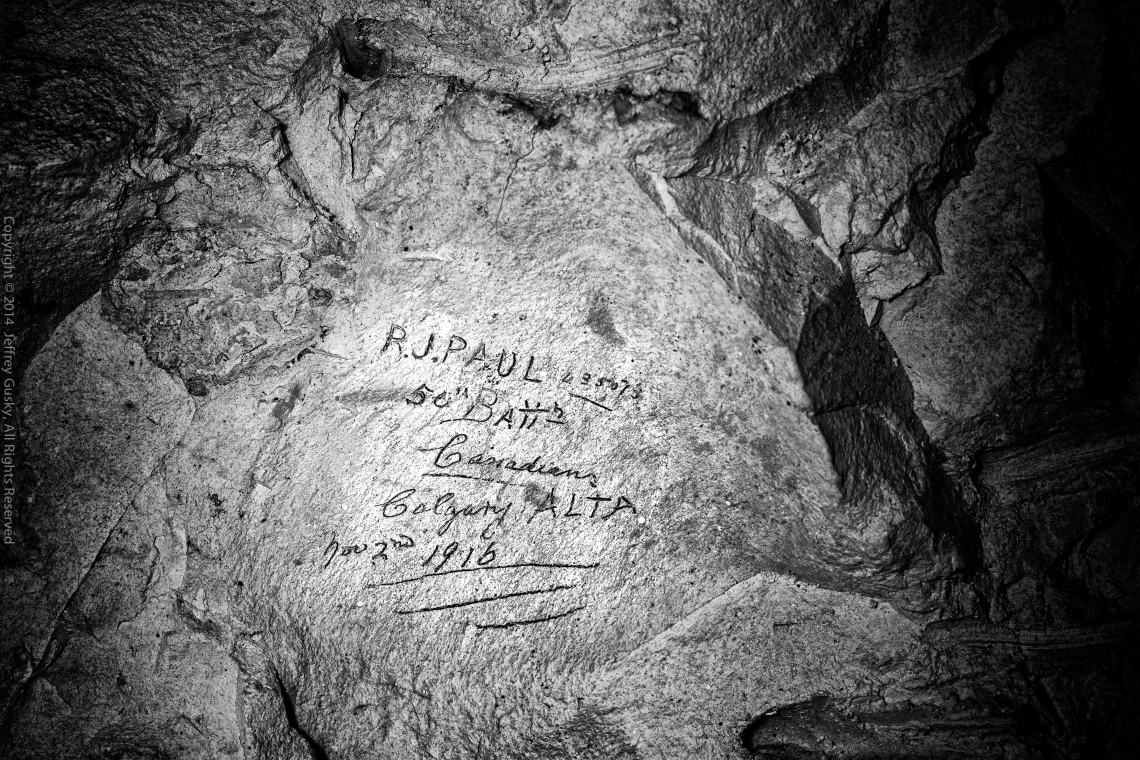 Robert Paul from Troon, west Cornwall, carved his name on the side of a chalk tunnel on the Western Front on 2 November 1916. It was a cold wet day and the battle of the Ancre Heights was about to begin. Two months later he was dead, missing on the battlefield. His body was never found.

Paul had left Troon a few years earlier and signed up 1915 in Calgary, Alberta, where he had gone to live.

Canada was then a destination for many young Cornishmen keen to find a new life on the other side of the Atlantic. Work in the local  mines had dried up.

Paul was a carpenter – like his father – and came from a family that was used to travelling huge distances for work. Sadly his last journey across the Atlantic, back to the UK and ultimately the Western Front, meant he never returned to live in Cornwall. Paul was born on 2 December 1889 in Wandsworth, London, to Cornish parents, the youngest and only boy in a family of four children.

His father, John, was working as a carpenter at West London District School, a huge establishment built in 1869-72 to educate the poor of St George’s Hanover Square and Paddington parishes.

John Paul had returned home to marry a local girl, Ann Rule, on 20 August 1882 back in Treslothan at his local church, but went back to London to bring up his young family. By 1890, however, the Pauls had settled back in Cornwall.  Robert Paul was baptised at Treslothan Church on 9 March that year and the 1891 Census shows Ann and the four children living in Troon.

The head of the family, John Paul, however, was not with them. He had left to earn his living in mines overseas.  Ann Paul nee Rule would have understood. She had been born in Michigan, USA where her father worked as a mining engineer.

Sadly Ann died a few years later in July 1910 and perhaps news of her decline brought John Paul home. He arrived in New York from Mexico on 1 July 1910 and might have made it back to Cornwall just in time to see his wife once more. She died on 25 July at the age of 52.

Robert Paul was still in Troon a year later at the time of the 1911 Census, but immigration records then show him arriving in Quebec on 24 June 1913. In 1914, he was living in Calgary which was quickly becoming a boom town after oil was discovered.

After war broke out at the end of July 1914, thousands of young men in Canada signed up.

On 23 April 1915, Paul enlisted with the Canadian Expeditionary Force (CEF) in Calgary.  He gave his religion as Church of England and his next of kin his father back home at 23, New Street, Troon. He was relatively tall at 5’ 8”, had a dark complexion, blue eyes and dark hair. He joined the 50th Battalion (Calgary) and on 27 October 1915 travelled back to the UK on the SS Orduna, a troop transport ship that carried many thousands of men from Halifax, Canada to Liverpool in the war years.

From Liverpool he travelled south to Hampshire and Bramshott Camp,  set up by the Canadian army as a reception and training centre for infantry units destined for the Western Front.[2[

The Battalion eventually arrived in France on 11 August 1916, in the midst of the bloody battles of the Somme. It was involved in the Battle of the Ancre Heights in November and suffered heavy losses. When the Canadian Corps was relieved after the Somme, its casualties had been 24,029, about 24 percent of the forces involved [1]. The Battalion then went north for preparations for the offensive at Vimy Ridge and it was during that time that Robert Paul died. Papers surviving from an enquiry into his death  show that he went missing on 11 January 1917.

As his body was not found, as in all such cases, a Board was held to determine why he was missing – whether Killed in Action, Missing in Action or desertion.

In Paul’s case, a fellow private, Albert Thomas Jenkins made a statement. Jenkins, a gas engineer born in Pembroke Docks, Wales, had been awarded the Military Medal in the field just a few days earlier. (Tragically he was killed during the Battle of Ypres later that same year). At the enquiry, he said that he had seen Paul on the day he was reported missing in the trenches at 1.15pm.

“I met Reg. No. 435073 Pte Paul R.J. at the junction of HOLLOW WAY and BANKSIDE trenches,” he said, referring to the trench names used by the soldiers of the 50th Battalion to navigate around their sector of the Western Front.. “He told me that he was going up to the Front Line to see if any of the men were wounded. The enemy were shelling our front line. I have not seen him since.”

The enquiry concluded that Paul was killed and his body either buried or blown to pieces by a shell. Brigadier General Edward Hillman, Commanding the 10th Canadian Infantry Brigade, confirmed the findings of the Board.

“I concur in the opinion of the court and do not attach blame to anyone.”

Paul is remembered on the huge memorial to Canadian dead at Vimy Ridge which overlooks the battlefields that saw such terrible carnage. 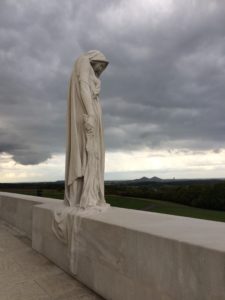 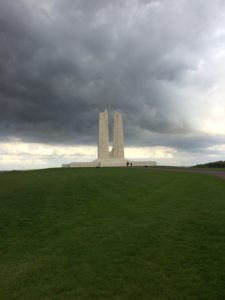 His name is also back on the War Memorial outside Treslothan Church where he was baptised.

His family is also remembered by a Troon resident, now living in Truro. Alan Truan, lived in New Street, Troon, from 1946 until his marriage in 1969.

He can remember a member of the Paul family on the street, in all likelihood one of Robert Paul’s sisters.

“I remember a much respected older lady, who we called Miss Paul, who  lived at that end of the street,” he says. “As lads we would tidy her garden and cut the grass for her. We always had a shilling between us for sweets.”

By 1939 records show that the Paul family had moved to 17 New Street. The father, John (who put his profession as a joiner) was 85 and living with his two daughters, Jessie (aged 56) and Eliza (aged 55), who were both schoolteachers, and unmarried.

Alan recalls his mother saying that the Miss Paul he remembers in the years after World War Two was a retired schoolteacher.

It’s cheering to think that though it’s more than 100 years since Robert Paul’s death, there’s still a link to the present and someone remembers this long-established village family.

With many thanks to Richard Devonshire, who grew up in Cornwall, for uncovering these important records. Richard has researched other Cornish soldiers who joined the CEF: click here to read about Josiah Mitchell from Townshend.

[2]  Although the great bulk of Canadian troops arriving in Britain early in the Great War were encamped on Salisbury Plain, three of the main Canadian bases were in the Aldershot Command area – Bramshott and Witley (mainly infantry) and Bordon (Artillery, Cavalry and Canadian Army Service Corps).  Bramshott Common was cleared of all buildings after World War One and in due course the government planted maple trees along the eastern edge of Bramshott Churchyard, where most Canadians are buried, and placed headstones on the graves. The War Cross was dedicated in April 1921 and little did anyone at that time guess that less than twenty years later the Canadian Army would be back in England again. Source: Hants CC