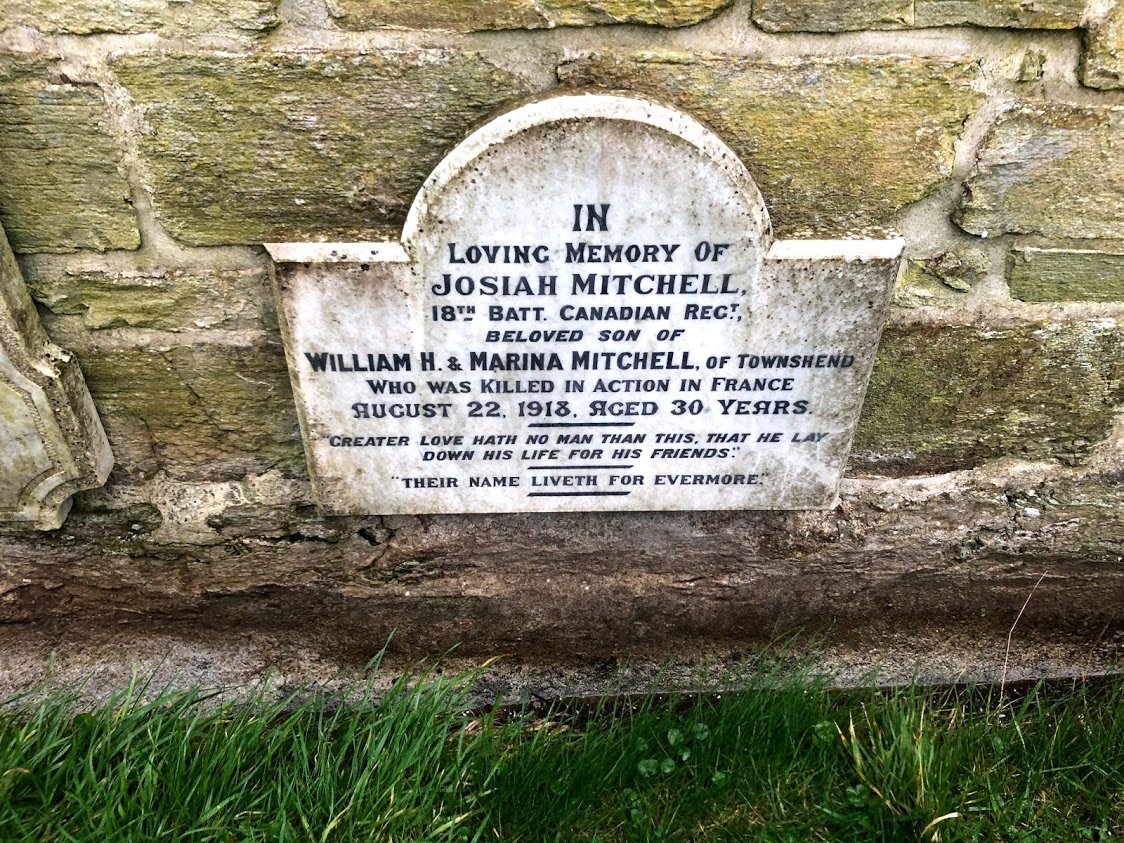 The crossroads in the centre of Townshend, west Cornwall

All stories relating to local men who died on the Western Front are poignant.  It was a long way from home and a world away from the close-knit rural life that they and their families had known. Josiah Mitchell, a young man from Townshend, west Cornwall,  has a particularly touching history. He was one of five young men from the village who emigrated to the US in June 1910:  the others were Joseph Berriman, Ben Cliff, Herbert Winn and Fred Mitchell.

Townshend Wesleyan Chapel gave them a good send-off.  Winn and the two Mitchells all received a copy of the Bible, presented by the Chapel Sunday School of which they were members. They also sang in the Choir and were members of the Band of Hope, the society promoting teetotalism which had a keen following in Cornish chapels at that time. “This will add considerably to the loss the little church and its various institions have already sustained by emigrations and removals, chiefly due to scarcity of employment,” said the local paper. [1]

On his arrival at Sault Sainte Marie, Michigan, in June 1910, Josiah stated he was joining a friend in Houghton County, a mining district – W. J Tregembo, another well-known Townshend name.

Many Cornish miners went to Michigan to work in the copper mines of the Upper Peninsula. Later, they began moving south to look for work in the auto industry. Detroit in 1910 was already a thriving city, a world away from rural life in west Cornwall

Josiah appears to have followed in the footsteps of others to Detroit and found a job in the burgeoning car manufacturing industry there. Records show him employed in city directories in successive years. He was clearly hard-working and successful.

Home, however,  would not have been far from his mind. His younger brother, Samson, eventually joined him in the US in 1914 at the age of 23 and also worked in the car industry.

Everything changed when the US entered the war in 1917. When Josiah’s US draft card arrived in November that year, ‘hammerman’ was the profession that he gave.  He was 28 and working for the newly formed Fisher Body Corporation, soon to become one of the biggest car body manufacturers in the world.

A few months after signing the draft card, Josiah chose to cross the border to Ontario in Canada and enlisted in the 18th Battalion (Western Ontario) division of the Canadian Expeditionary Force on 1 November.  His papers give a picture of a healthy young man –  5′ 5″, with fair hair and blue eyes.

He gave his religion as Methodist – still remembering the Chapel back home.

Not long before Christmas that same year, on 18 December  he sailed back to the UK on the troopship RMS Grampian, which carried thousands of Canadians over the ocean to the battlefields during the war years.

After docking in Liverpool on New Year’s Eve, the troops travelled south to Bramshott Camp, set up in Hampshire for Canadian forces. The start of 1918 marked a turning point in the war. The Allied forces in Europe were exhausted. These were anxious times. Perhaps Josiah had the chance to travel down to Cornwall but more likely he did not.

After a wet January, the Germans started an intense Spring Offensive which rattled the Allies and sent many units on the retreat.

The week after Easter –  on 7 April 1918, Josiah left Hampshire for France.  He was called as a battle casualty replacement to the Canadian Reinforcement camp close at Etaples, close to the Front.

He went out to the front line on 14 August and was there for just under two weeks.He was killed in action on the road between Arras and Cambrai on 27 August 1918 during a skirmish known as  ‘Rake Trench’. It was a tragic day for the unit: 14 others were also killed and 150 wounded. He is buried at Wancourt British Cemetery, about eight kilometres east of Arras.

He had listed his next of kin as his mother, Marina. Very poignantly he assigned his medals and pay to go back to his fiancee Ida Cliff back in Cornwall, the sister of Ben Cliff who had left the village with him in 1910.

Ida Cliff, aged 31 when Josiah died, would have known him since childhood. Just when she last saw him is unclear but she must have imagined that they would meet again. Young men who had emigrated did return home: most had the dream of going back to Cornwall to live once they had earned their fortune. Townshend in the early 1900s

It’s unclear whether Josiah made it back before war broke out in 1914. But as soon as hostilities started it is almost certain that he would not have returned to visit the Cliff family who lived on Godolphin Bridge, just down the hill from Townshend on the road to Godolphin. The head of the family, Benjamin, was a farm labourer. Many military records relating to World War One were burnt in 1940 when an incendiary bomb dropped on the War Office. But thankfully records relating to the Canadian Expeditionary Force survive and have led us to Josiah Mitchell of Townshend. With many thanks to Richard Devonshire, who grew up in the area, for uncovering this history.