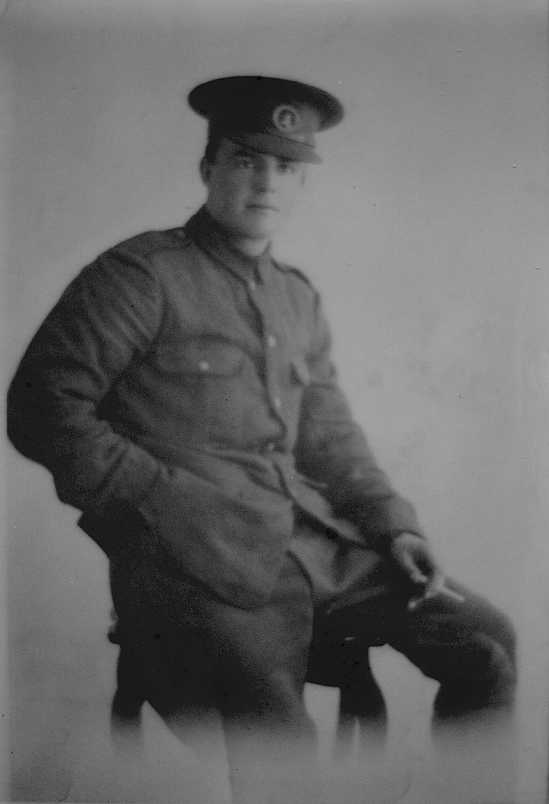 Private John (Jack) Beckerleg of Penzance came from a sea-faring family and emigrated  to South Africa in 1912. On the outbreak of World War One he signed up in Capetown in 1914, returned briefly to England in 1915 before leaving once again for overseas – Egypt. He died there in January 1916, accidentally killed by a bullet shot to the head.

With thanks to Richard Devonshire, who grew up in Leedstown and Townshend in west Cornwall, for his extensive research on this story.

Private John (Jack) Beckerleg of Penzance was born in 1892 and was one of ten children – six sons and four daughters. He lived by the sea and he and his family’s life was marked by it. His father, Captain Barzillai Beckerleg, was tragically lost in a gale in the Bristol Channel with all hands of his ship, the Penzance schooner Lanisley,  in 1895. Jack was just three.  Around 2,000 people attended his funeral in Penzance, according to the local paper – one of the largest that had been seen in the town.[1] Four years later, Jack’s eldest brother William (Willy) was killed in a fatal accident on a steamer at Cardiff. [2] The steamer was one of Hain Steamers operating from South Wales, founded by the Hain family of St Ives with backing from Bolitho’s Bank and was purchased by PO in 1917.  [2]

After these tragedies widow and mother Theodora (nee Strick) was left to bring up her surviving family. When World War One broke out in 1914,  they were living at 6 Alverton Terrace, Penzance. A move to South Africa

Jack had already left home. In 1911, he was living in Newquay and working as a bank clerk. But a year later, he had sailed for Cape Town, South Africa, on the Balmoral Castle, of the Union-Castle Mail Steamship Company, on 4 May 1912. His stated profession was ‘clerk’. He was just 20. It is not known how he forged a life after arriving in South Africa.

But his military records emerge almost as soon as war broke out. He answered the call to arms early and served with South African forces until his accidental death.

In August 1914 he joined the South African Irish which was formed in that same month when three officers – Major George, Twomey, Captain J Jeoffreys and a Captain MacDonald – met at the Irish Club in Johannesburg to raise an Irish regiment from Johannesburg and its surrounding areas. On 22 October 1914, the South African Irish regiment went to the city of Pretoria, where it protected inhabitants and the Governor General’s house again any possible rebel attack. It remained there for some weeks until it left for Maitland Camp in Cape Town on 9 December 1914 to participate in a campaign in German South West Africa.

A transfer to the 3rd South African Infantry Regiment

It was after transferring to this regiment that John headed back to England. The regiment sailed for England on the SS Norman on 23 August 1915, arriving on 3 October 1915.  Three months later, he left from Devonport on the H.M.T. Saxonia (His Majesty’s Troopship) on 29 December 1915 and disembarked at Alexandria on 12 January 1916. (The Saxonia was a Cunard Lines vessel of 16,000 tons taken into service as a troop ship).

Fighting the Senussi in Egypt and an accidental death A decision was taken in December 1915 to send the South African Brigade to Egypt, where the Senussia tribe – a religious order in Egypt and Libya – led by Gaafar Pasha was threatening to overrun the country.  Just under two weeks after disembarking, the troops saw action at Halaxin.  They then marched along the coast but by the time they engaged with the enemy at Agagia on 26 February 1916, John Beckerleg was already dead. He had been killed by an accidental gunshot wound to the brain on 31 January 1916. He was only 25.

He is buried at

Alexandria Military Cemetery, as well as being remembered on Penzance War Memorial, the Penzance Book of Remembrance and on his parents’ grave in St Mary’s Church, Penzance.

[2]  William Barzillai Beckerleg, who died aged 21, was second mate of the steamship Treneglos. The vessel was being warped into Roath Dock in Cardiff when the pin round which the rope was turning snapped, and the deceased was struck on the head.

Mr Bernard Reece (coroner) conducted an in- quest at Cardiff Town Hall on Saturday touching the death of the second mate of the Treneglos, W. B. Beckerleg, who met with an accident on board the ship on Friday morning it was proceeding out of the Roath Basin, from the evidence it appeared that a portion of a chock fastened on to the bulwarks of the broke off while a rope was being drawn around it, The detached piece of metal struck deceased on the forehead, inflicting a compound fracture of the skull. Deceased was removed to the Hamadryad Hospital Ship, and succumbed a few hours later without recovering consciousness. A verdict of ‘Accidental death’ was returned.

[2]  The company’s first steamer was named Trewidden in honour of the Bolitho estate outside Penzance and all ships of the company had the prefix ‘Tre’ the Cornish for ‘farmstead’.