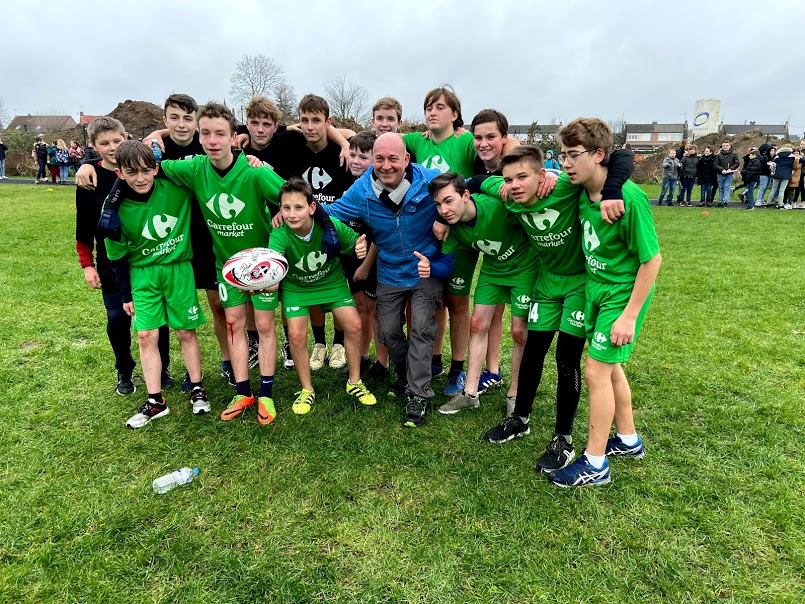 It was a cold and wet but splendid afternoon on 6 December 2019 when the College du Sacre Coeur in Estaires, France, commemorated three historic rugby matches played on the Western Front nearby more than 100 years earlier.

The games in May 1915 were played between Cornish and Devon teams in the 25th Field Ambulance after Camborne Rugby Club sent out a ball.  The men organised three  matches: the Cornish won 2-1 overall.

On Friday the school played a commemorative match. It has strong links with this history: it was turned into a hospital during World War One and the 25th Field Ambulance was based there. 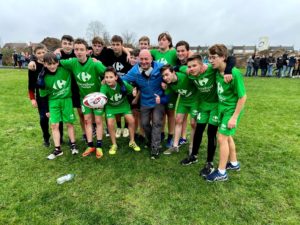 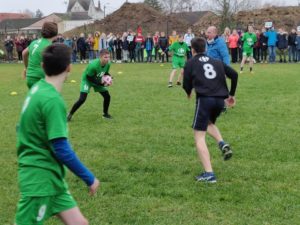 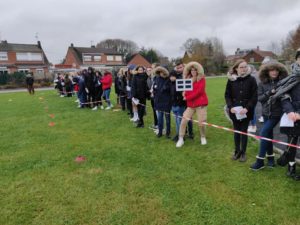 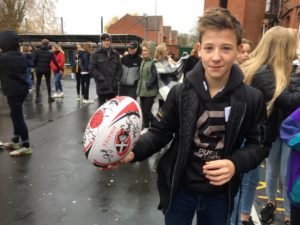 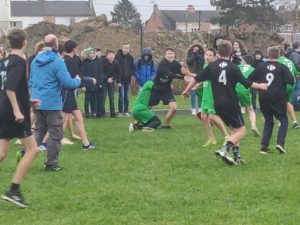 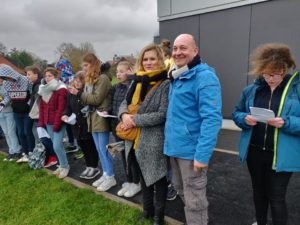 English teacher Anne Debette and her colleages at the school organised the commemoration 104 years later with seven-a-side teams who wore black (Cornwall) and green (Devon). Cornwall won! The school orchestra played the National Anthem to start, the crowd (wearing black and gold – or green!)  cheered throughout and the games teacher Frédéric Derensy who coached his students over several wintry afternoons posed at the end with the teams.

The team used a ball signed by the Cornish Pirates (based in Camborne for several seasons some years ago) presented to the school in October 2019 by Camborne MP George Eustice.

It was a great occasion and a credit to the school which showed such a deep commitment to local and international history.

Alison Pooley, granddaughter of Leslie Pentecost who played in one of the matches, made the long journey from Camborne to the north of France to see the match. She said it was fantastic and a truly historic occasion. She had corresponded with the students in preparation for the day as the school also prepared an exhibition about this history: to read more, click here.

Our work in Estaires started in 2017 when we forged links between Cornwall and the town having discovered that Cornish miners from Dolcoath were stationed in Estaires. Camborne Youth Band visited the town in 2018; Corey Williams, the great great grandson of Fred Negus, one of the miners, was in the Band and played Fred’s 100-year-old bugle.

In November that same year, we visited the town again on Armistice Day with Alison Pooley and her sister Carmen Saunders to honour these historic links.  The school pulled out all the stops then, too, with a fantastic exhibition, musical performance and play.