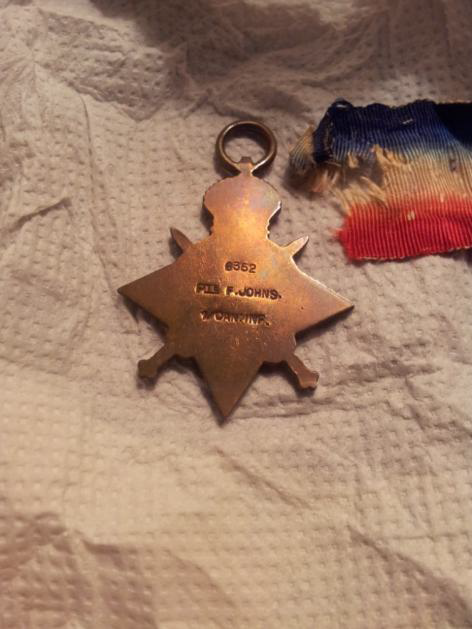 Items like medals are especially useful as they serve as a clear point of departure for research. We have been lent a particularly poignant medal with a name on it: Private Frank Johns, no. 6352, 1st Battalion Canadian Infantry.
The records of Frank Johns’ life were mostly lost, and the family were happy for us to take up the story again and see what more we could uncover. A few things were known, that he had emigrated from St Ives, Cornwall to Canada, and that he fought and was killed at Festubert in France on 27 May 1915.

From these two medals, our researcher George Harris uncovered his story.  He writes:  “Over the past few months I have explored Frank John’s story in more depth … What an incredible story it is.

Frank Johns was the son of Elizabeth Johns, of 75 Fore Street, St Ives.

From the regimental details on the medals we have been loaned, it is possible to start tracing Frank John’s story.  With the information gleaned from the medal, I contacted the Canadian Armed Forces and got hold of his attestation papers.

It was not unusual for a Cornishman to be plying his trade abroad before the war.

Figures show that by the end of the 19th Century some 230,000 men and women had left Cornwall in search of work.

Advertisements such as this were common at the time.  Another family has mentioned this to us: Chris Roberts said his father, Harry, left from Crowan for Canada with friends to find work as a carpenter.  Work was hard to find in Cornwall: America seemed full of promise. From his attestation papers, signed a century ago, we can see that Frank Johns was working in Canada as a carpenter.
He signed these papers at ‘Valcartier’, a major recruiting station for the overseas expeditionary force.
I find them quite moving documents.
Having got this far in the project from a starting point of an impersonal, dusty medal we suddenly have a description of Frank.
A full list of physical attributes and his mother’s address.
This story is international and reminds us that the war drew people and nations to it from across the globe.

In the autumn of 1914 The 1st Battalion Canadian Infantry travelled to Salisbury Plain, Wiltshire for training. This remarkable photo shows a regiment of Canadian soldiers marching past Stonehenge. We don’t know what Frank thought of the training. The end of 1914 was one of the wettest periods on record, and machinery and men frequently got stuck.

In 1915 the 1st Battalion was sent to the Front, a full list of engagements can be seen here.

Frank Johns fought in many of these battles and was very popular amongst his fellow soldiers.
In May 1915 the troops were involved in fierce fighting in Festubert, France. Frank Johns was hit and killed by shrapnel on the 27th May 1915.

This photograph of the ruined battlefield near Festubert was taken in the spring of 1919.

The Canadian troops fought at Festubert in May 1915 but no official photographers accompanied them to the Front. As the photograph below shows, the ground still shows the scars from the heavy fighting four years after the battle.

According to letters from the battle,  including one from George Cogan who grew up with Frank and travelled whit him throughout his life, writes that death was ‘instantaneous’ and ‘I shall miss him very much’.

Frank was clearly extremely popular and special permission was given for his burial to be carreid out behind the trenches. Leo Coggan writes: ‘We gave him a fine grave with flowers on it.’ All correspondence was heavily censored and it is hard to imagine what conditions were really like.

One more explicit letter from Private A Trenerom writes: ‘It was a living inferno with all kinds going on 24 hours a day.’

Frank Johns is commemorated in the First World War Book of Remembrance in the Memorial Chamber of the Peace Tower in Ottowa. His name appears on page 21.

Although his grave is not listed in any records, he is also commemorated at the Vimy Memorial, Pas de Calais, in France.” Nearly 100 years after his death, Frank Johns was remembered along with many others who died in the conflict in November 2014 in his hometown, St Ives.  This video shows Camborne Youth Band playing as wreaths are laid on the War Memorial. Frank Johns’ name appears at minute 6.40.