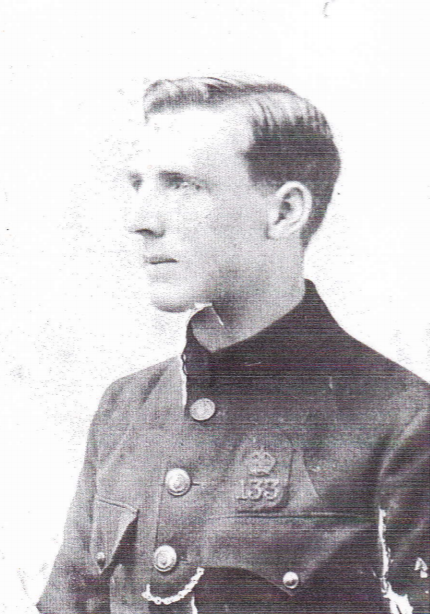 William Prideaux, an active member of the congregation at Camborne Wesleyan Chapel, refused to fight in World War One. He was a deeply convicted pacifist. His story illustrates how profoundly the war years shaped the lives of individuals and families, even if they did not see combat on the Western Front.

William, and his mother and two sisters lived on Vean Terrace in Camborne where he was a constable in the police force. Compelled to quit police work following mastoid surgery that rendered him completely deaf in one ear he was appointed as the town’s librarian.

At that time formal training for librarianship was almost unknown but William evidently took the work very seriously – starting a children’s section and choosing to spend his holiday time visiting the Plymouth library to learn how the library could be more professionally run. Despite the long hours (the library stayed open till 10p.m.) and the struggle to find funds for enough books, he found time to be deeply involved with Camborne Wesleyan chapel, becoming a local preacher and helping run the “Adult School” which met at the Literary Institute every Sunday.

Somehow in that period he also found time to court a fellow Wesleyan, Myrtle Uren, whose brother Godfrey was organist and choirmaster at Camborne Wesley. The advent of the war compelled Christians to examine how their faith should direct them to act. The answers they found varied widely. While many churches, including Camborne Wesley, prayed for a military victory and urged enlistment, others reflected on the Commandment “Thou shalt not kill” and limited their support to non-combatant roles.

The division in attitudes became more intense as soon as Conscription came into force in January 1916 under the Military Service Act. Some convinced pacifists who had initially volunteered to serve in the Royal Army Medical Corps came to the conclusion that even though they weren’t personally required to kill, their participation was serving to facilitate the continuing slaughter. William Prideaux was one who came to this conclusion.   He began to take what was known as an “absolutist” position, refusing to participate in any activity that would further the war effort. He spent time with people who had similar views, attending Quaker meetings in Redruth as well as meeting of the local No Conscription Fellowship Chapter where he served as the group’s Secretary.

In March 1916 he appeared before the local Tribunal and was granted an exemption as a conscientious objector. [1] That might well have ended the matter but a Major F. D. Bain on the Tribunal overturned the decision. Bain appears to have been an honorary, or brevet, major who was prominent in local military matters at the time. [2]

In July William was charged with being an “absentee” from military service and sent to prison. This attention derived partly from his popularity, but also from his willingness to challenge widely respected local dignitaries like C.V. Thomas, a well-known Methodist preacher.  Hostility to William’s position from people like Bain came partly from their alarm that his role as local preacher would help to disseminate his views among other young men.

Meanwhile the War Office was planning much more drastic action to punish COs. Now that conscription was in force, any CO who had been refused exemption by a Tribunal, was considered to have enlisted into military service and could be forced to join a combatant unit or possibly opt to join the Royal Army Medical Corps (RAMC). [3]

Disobeying a military order at the front would likely result in court martial and execution by firing squad.  The army secretly transported  a group of such men in handcuffs to France with the intent of executing them once they refused orders to take up arms. News of the plan leaked out and an outcry in the liberal press scuttled the plan just in time.

Supporters of the war effort tried to characterize COs as cowards who had come up with a ruse for evading military service. Adopting such a position in an atmosphere of war fever required unusual courage.  William’s  status as one deemed  medically unfit for police service would almost certainly have enabled him to be exempted on those grounds but he chose instead to take the stand his conscience dictated. Lloyd George had vowed in July 1916 that he intended to make ”the path of that class a very hard one”. During the next three and a half years William would serve successive sentences for hard labour in eight different prisons, confined to a 7’ by 12’ cell and forced to comply with the “rule of silence” that forbade any communication with other prisoners. Each of his separate sentences began with a two-week period of sleeping without a mattress.  No letters were allowed for the first two months and after that only one a month. But in any case by that time a further court martial would probably have taken place and the whole process would begin again in another prison. With a prison diet  that consisted only of porridge, dry bread and mealy potatoes at least 100 of these men, some of them, like William, already in poor health, died in custody.

In November 1916 William was found collapsed and unconscious in his cell and spent a week in Portland Military Hospital. Years later he told his family that he would have preferred to have been shot rather than being returned to prison. COs were not released from their jails at the end of the war but kept incarcerated until all enlisted men had returned home.

It appears that William was in no condition to return home after he was released but recuperated in the Derbyshire village of Crich in the home of supportive Quakers before returning to Camborne  in May 1919.

Even though newspaper reports show that he was warmly welcomed back into the community, his position as a CO ensured further punishment. All COs were now legally disenfranchised for 5 years and there was little likelihood of their finding paid work.

It was plain that he and Myrtle had no future in their home town. In less than a year William had boarded a ship to Canada to find a temporary home with his uncle in Ontario. Two months later Myrtle boarded the Empress of France sailing to Quebec, the passenger list showing that she was “to marry Mr. William Prideaux, 38 Maple Street, St. Thomas, Ontario”. Following their marriage, William and Myrtle moved to the US where William was to serve as minster to Quaker Meetings in three different Eastern states. Although Quaker worship is based on silence William and Myrtle’s love of music had crossed the Atlantic with them. While serving as Minister to the Quaker Meeting in South Durham, Maine William founded a 46 piece children’s orchestra provided with begged and borrowed instruments.

A move to Everett Washington with their two children brought William’s outspoken views into a fresh conflict. It seems that his radical pacificism (and perhaps other views) clashed with members of the Everett Meeting. By 1938 he had lost his position as Minister. Undeterred, he founded an independent “Church of the People,” spending his time visiting hospitals and prisons,  the family relying heavily on food donated by the new congregation.

His obituary in 1956 describing him as “a forceful speaker and lecturer speaking forth of the will of God as he understood it” makes particular mention of his prison visiting. No doubt he would have been glad to know that his son would make a career in the prison service dedicated to creating more humane conditions.

With thanks to Richard Devonshire for additional military background.

Background note: Gillian Thomas, who has spent many years researching William Prideaux’s story, kindly contributed this article to Heart of Conflict. We are very grateful to have this thoughtful and important addition to the site.  Gillian grew up Camborne but emigrated to Canada, where she still lives.