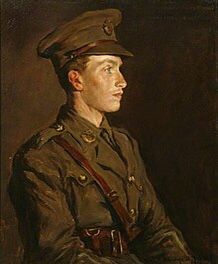 The church at Sancreed, a small village on the Land’s End peninsular, has a poignant memory of World War One – a memorial to William Alexander (Alec) Forbes, son of the artist Stanhope Forbes (1857-1947) who forged his reputation in nearby Newlyn and established it as a famous artists’ colony in the late 19th and early 20th century.

Forbes painted his son in 1916 posthumously from a photograph. Alec had apparently ignored his father’s wishes that he should not join an active regiment and joined the DCLI (Duke of Cornwall’s Light Infantry). He went out to the Western Front in summer 1916 and tragically was killed at the Somme on 3 September aged 23, only a short time after his arrival. Theportrait is now in the Regimental Museum, Bodmin.

In Sancreed church is a brass relief of the young soldier and next to it is the cross that was erected where he fell in Guillemont. This was brought back to Cornwall and installed in the church in 1920 after it was replaced with a standard Commonwealth War Graves headstone in Guillemont cemetery in France.  That stone had the following inscription: ‘He saw beyond the filth of battle and thought death a fair price to belong to the company of these fellows’.

Impressively Stanhope Forbes did not shy away from war-related issues after the death of his son. His painting of women in a munitions factory dates from 1918.

His grave (and his wife Elizabeth’s) grave is yards from his son’s memorial – in the graveyard outside the church.