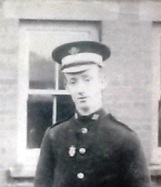 In 1915, three rugby matches were played at the Front between Devon and Cornwall teams, after Camborne Rugby Club sent out a ball.

One of the soldiers who played in the rugby teams was Fred Negus, born in Yorkshire in 1883. He was a tin miner at Dolcoath Mine and lived with his wife Mamie and their five children at 1 Dolcoath Avenue, Camborne. He went to serve in the 25th Field Ambulance, 8th Division, Expeditionary Force and was later commended by Captain William Blackwood  for his bravery. Click here for an article about this.   Negus survived the War and died in August 1941. For a report on his funeral, click here.

On 14 January 1914, The Cornishman published extracts of letters received by Capt. W. James from Dolcoath men miners serving at the Front in ambulance and other work. Fred Negus wrote:

“It has been very cold here, but we have got through alright so far. As you say, we are seeing some sights, but none that as yet we have backed out from; we are used to it now and manage to stick it alright. We are still with Dr Blackwood and I tell you, Capt. he is a nice man to us. I am trying to get some German bullets for you. We want for you Capt. to thank all the men and ladies who sent us things; we had a very good time at Xmas; we had 12 puddings from Mr Willie Stephens, and if you come across him tell him for us that we thank him very much for his kindness to us; also thank Capt. Arthur and Miss Thomas. I will close by wishing you all, from the men, a happy New Year.”

Maisie, a Girl Guide from Camborne, recorded her brother (of a similar age) reading this letter just before Christmas 2014.