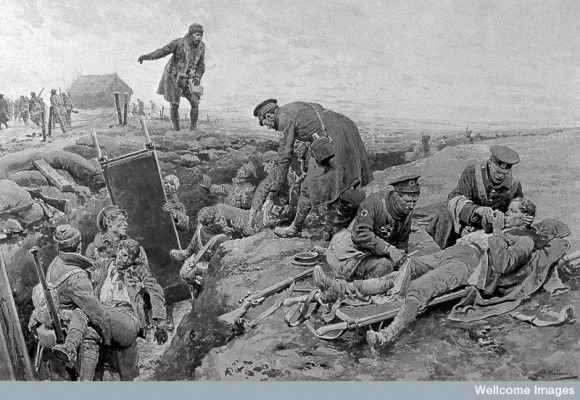 We’re researching the work of the Royal Army Medical Corps (RAMC) on the Front. A brigade of men went out from Camborne, Redruth and Porthleven to the Front in 1914, just after war broke out and we are trying to trace what happened to them and where they served. We’ve already tracked down three of the grandchildren of men who served in this brigade under Camborne doctor William Blackwood throughout the war.  (BBC Radio Cornwall featured this story on Remembrance Day 2015).

Here’s a revealing letter about life in the RAMC in the Rochdale Observer at the time:

“In our unit we have different lines of duty. We do a few weeks service in the trenches and all along the advanced firing line; then we retire for a week or two for inside-hospital work in the rear of the line to give the men a bit of ‘nerve rest’. Then batches of 30 or 40 men go on trench duty for two or three nights, and continually relieve one another. These stretcher bearers are fine boys. It’s no joke being under fire and unarmed as they are. There is sometimes a tendency for the fighting units to rather smile at R.A.M.C. men. But when the blood is flying about the smile vanishes and is replaced by a look with, shall we say, gratitude in it.

Our officers are all medical men, and they know what work is when the maimed and wounded are being sorted out from the killed. One day, some four weeks ago, our half-dozen officers had 900 casualties to dress and patch up. And the wounded British soldiers are trumps, I can assure you. Never a growl or complaint from them. They lie at the operating tables with a stoicism which is almost unbelievable. And they are so grateful for the least little kindness that we can do for them. But it’s an awful shame that Germany should have provoked this war. Their own men who pass through our hands as prisoners curse the Kaiser and his satellites quite as effectually as we do. One prisoner we had captured actually pulled four of our stretcher-bearers out of the line of his own countryman’s fire some weeks ago and practically saved their lives.

Of course, those of us who have staff duties (myself included) hardly run the same risks as the bearers do. But I must say this: Our good old boys who carry the stretchers are the limit for pluck. As meek as lambs one would imagine, but just see them when the Huns are at work and the Allies are showing them a little bit of English, Scotch and Irish mixed, not to mention the Welsh boys. The French and Belgian soldiers, too, are magnificent. The Germans have no possible chance of victory. It is only a matter of time for their final defeat, but they should not be given any chance of recuperating after peace is declared. So let everybody keep up this motto ‘To the bitter end’.”