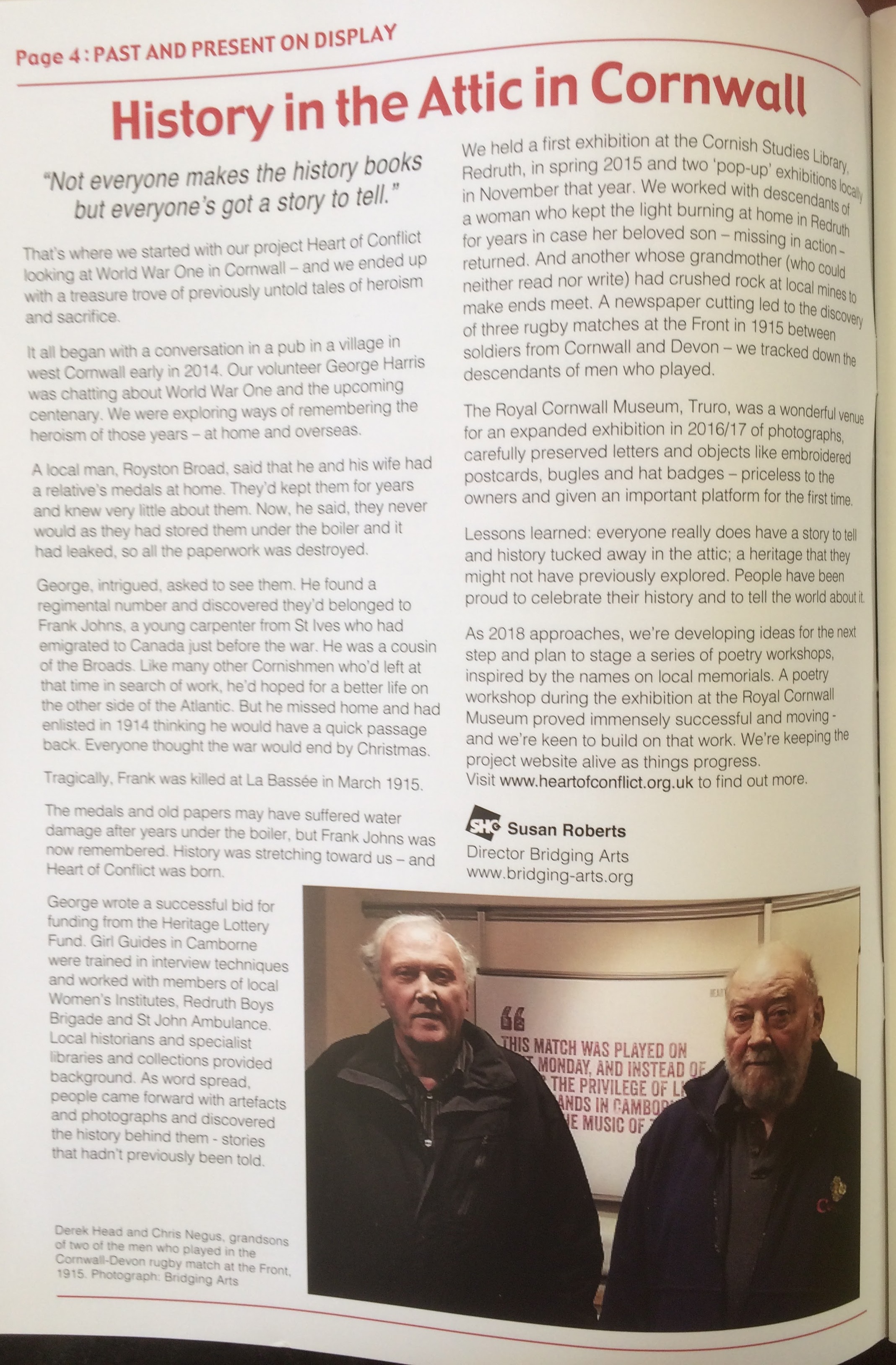 We were delighted to be able to write a piece about Heart of Conflict, our work in Cornwall on World War One, for SHCG News, the quarterly newsletter of the Social History Curators Group.

It was an easy piece to put together  – it’s been such a great project.  The newsletter will eventually be put online: in the meantime, there’s a lot of information about the SHCG’s work on their website. Click here to read more.  Here’s the full text of the article:

‘History in the attic’ in Cornwall

“Not everyone makes the history books but everyone’s got a story to tell.” That’s where we started with our project Heart of Conflict looking at World War One in Cornwall – and we ended up with a treasure trove of previously untold tales of heroism and sacrifice.

It all began with a conversation in a pub in a village in west Cornwall early in 2014. Our volunteer George Harris was chatting about World War One and the upcoming centenary. We were exploring ways of remembering the heroism of those years – at home and overseas.

A local man, Royston Broad, said that he and his wife had a relative’s medals at home. They’d kept them for years and knew very little about them and now, he said, they never would as they had stored them under the boiler and it had leaked, so all the paperwork was destroyed.

George, intrigued, asked to see them. He found a regimental number and discovered they’d belonged to Frank Johns, a young carpenter from St Ives who had emigrated to Canada just before the war. He was a cousin of the Broads. Like many other Cornishmen who’d left at that time in search of work, he’d hoped for a better life on the other side of the Atlantic. But he missed home and had enlisted in 1914 thinking he would have a quick passage back. Everyone thought the war would end by Christmas.

Tragically, Frank was killed at La Bassee in March 1915.

The medals and old papers may have suffered water damage after years under the boiler, but Frank Johns was now remembered. History was stretching back to us – and Heart of Conflict was born.

George wrote a successful bid for funding from the Heritage Lottery Fund. Girl Guides in Camborne were trained in interview techniques and worked with members of local WIs, Redruth Boys Brigade and St Johns Ambulance experts. Local historians and specialist libraries and collections provided background. As word spread, people came forward with artefacts and photographs and discovered the history behind them – stories that hadn’t previously been told.

We held a first exhibition at the Cornish Studies Library, Redruth, in spring 2015 – and two ‘pop-up’ exhibitions locally in November that year.

We worked with the descendants of a woman who kept the light burning at home in Redruth at night for years in case her beloved son – missing in action – returned. And another whose grandmother (who could neither read nor write) had crushed rock at local mines to make ends meet. A newspaper cutting led to the discovery of three rugby matches at the Front in 1915 between soldiers from Cornwall and Devon and we tracked down the descendants of men who played.

The Royal Cornwall Museum, Truro, was a wonderful venue for an expanded exhibition from 2016/17 of photographs, carefully preserved letters and objects like embroidered postcards, bugles and hat badges – priceless to the owners and given an important platform for the first time.

Lessons learned: that everyone really does have a story to tell and history tucked away in the attic, a heritage that they might not have previously explored. People have been proud to celebrate their history and to tell the world about it.

As 2018 approaches, we’re brainstorming ideas for the next steps and plan to stage a series of poetry workshops, inspired by the names on local war memorials.  A poetry workshop during the exhibition at the Royal Cornwall Museum proved immensely successful and  moving, and we’re keen to build on that work.  We’re keeping the project website alive as things progress. Visit www.heartofconflict.org.uk to find out more.