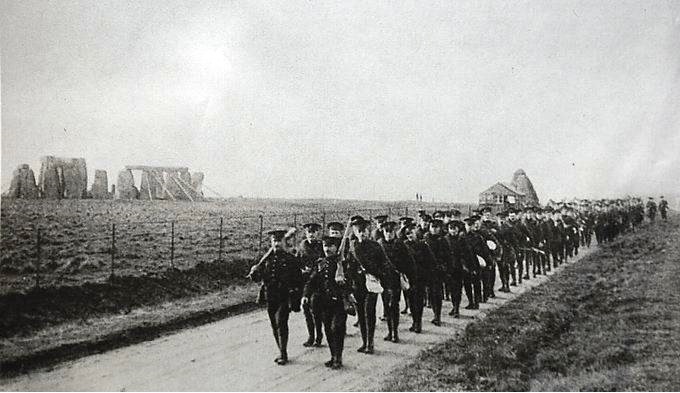 In the autumn of 1914 The 1st Battalion Canadian Infantry travelled to Salisbury Plain, Wiltshire for training. Frank Johns, originally from St Ives but who had emigrated to Canada, would have made this journey across the Atlantic.  This remarkable photo shows a regiment of Canadian soldiers marching past Stonehenge.

Thousands of soldiers trained on Salisbury Plain in preparation for action on the Western Front.

“The task of the men training on Salisbury Plain was to overcome the horrific stalemate of trench warfare. To replicate conditions on the Western Front, soldiers dug intricate networks of trenches which were then pounded by shellfire.

“Innovative but deadly new technology pioneered in the training camps and secret establishments created in Wiltshire during 1914 – 1918 resulted in major developments in aviation, artillery and chemical warfare.” English Heritage