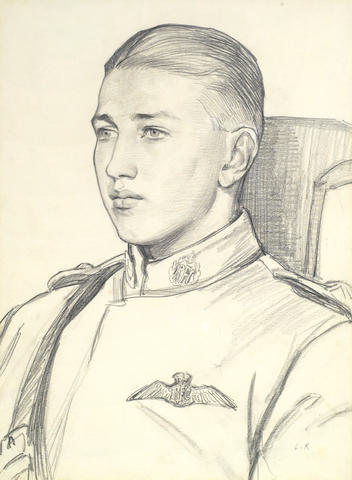 This story of a young man from Townshend, west Cornwall, emerged during research into the stained glass window in memory of War Dead at St Crewenna’s Church, Crowan.

Francis Jack Chown died in September 1917, only months after joining up. He was the son of Dr Francis Chown of Townshend. Dr Francis Chown in his garden 1915

The eminent artist Laura Knight drew the portrait of Jack: Knight often visited St Hilary, not far from Townshend, where the vicar, Rev. Bernard Walke, had close links with the up-and-coming artists then based in Newlyn.  She made friends with the Chowns  – and this picture resulted.  It was sold by Bonham’s a few years ago: here’s the excellent description in their catalogue.

“This striking portrait of a handsome young airman dates from Laura Knight’s early years in Cornwall. The son of Dr Francis and Annie Chown, Francis Jack Chown was born on May 3rd 1898 in the small village of Townshend, near Hayle in Cornwall. In his final term at St Paul’s, London, he was accepted in to the Royal Military Academy Sandhurst, but opted instead to join the Royal Flying Corps.

Following five weeks of intensive training at the School of Aeronautics at Wantage Hall, Reading, he joined 14 Squadron. Jack gained his pilot’s license in May 1917 on August 17th he volunteered to become a reconnaissance and scout pilot and was posted to 1 Squadron based at Bailleul in France. Jack wrote:

‘I have been posted to the finest squadron in the R.F.C., therefore much is expected of me.’

At 12:55 p.m. on September 20th 1917 Jack took off from a Belgian airfield on a ‘special reconnaissance’ mission in his Nieuport 27, No. B6675, in support of the assault on the Menin Road. Flying low with his aircraft was attacked by four German fighter planes. Although wounded in the head and back he successfully landed amongst the shell craters. His body was discovered lying beside the wreckage of his plane and he was buried in front of Chateau Wood, Hooge.

It was during a stay at St Hilary, a village close to Townshend, that Laura Knight became a good friend of the Chown family. During this time she completed three studies of Jack in his uniform as preparation for an oil painting of the young airman. It is believed that the portrait was never completed.

On Easter Day 1919 the villagers of Townshend joined Jack’s family for a memorial service. A tablet was ereceted to Jack by Lieutenant Colonel Thrakray Parsons. In his address the Colonel described Jack as:

‘modest and unaffected, but loyal and deep in his affections with a passionate love of home and country, with a deep and tender sympathy with all the wild things of life‘

‘one of our own willingly laid down his life that wrong might be worsted, that right might triumph, that our England and the world might be free.’

Jack was finally laid to rest in the Hooge Crater Cemetery just east of Ypres.”