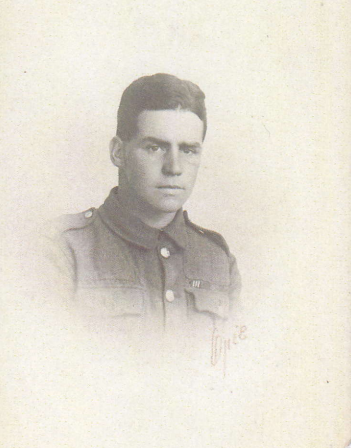 Gillian Thomas, brought up in Camborne and now living in Canada, has a poignant story of her uncle John Vandersluys Thomas, a Camborne man and former centre three quarter back for Camborne RFC who served with the 100th Field Ambulance in World War One and won medals for his bravery

John Vandersluys Thomas is a man whose promise was cut short by World War One.  Known as ‘J.V.’ he was a keen sportsman before the war and played rugby for Camborne. He survived three years of the conflict in which he won two medals for bravery. But he was badly gassed at the Somme and his health suffered permanently as a result. He was one of four brothers in Camborne in 1914, the sons of James Frederick and Bessie Thomas of Trelowarren Street. After war broke out, John like his two elder brothers, William Wilfred and Frederick Morley, enlisted.   The youngest son, the father of Gillian, did not.

“My father Arthur Leslie was the youngest who was born in 1899,” Gillian says. “He was called up on his 18th birthday, but family legend has it that his mother took the bus to the recruiting office in Redruth and said: ‘You’ve had three of my sons and you’re not having another one.’”

J. V. Thomas signed his attestation papers on the 21 August 1915. He was unmarried and working as a carpenter. Like many other young men locally, he became part of a Field Ambulance. A local doctor, William Blackwood, had made significant efforts in the preceding years to create St John Ambulance teams which could provide First Aid in the mines in case of accidents. These teams, too, were part of the Territorial Force formed in 1908 to augment the Regular Army as fears grew of another European war.

Thomas was enlisted in the Royal Army Medical Corps (RAMC) in the 100th Field Ambulance which was attached to the 2nd Division which was one of the first British formations to move to France, and remained on the Western Front throughout the war. [1]

A photograph of him in uniform shows him as a handsome, thoughtful young man. On the reverse are lines from Tennyson’s poem Ulysses, presumably written there by him:

One equal temper of heroic hearts,

Made weak by time and fate, but strong in will

To strive, to seek, to find and not to yield.”

The journey from the relatively close-knit community of Camborne  – where his family had a specialist painting and decorating shop – to the horrors of the Western Front would certainly have caused J. V. Thomas to reflect.

He arrived in France on 18 November 1915. Prosaically, the first record we have of him after that the following year indicates he suffered from severe dental caries, so much so that he was hospitalised for nearly two weeks. He returned to duty on 12 April 1916 as the British Army’s vast military machine prepared for the Battle of the Somme, intended to hasten an Allied victory.  More than three million men fought in this battle and one million were wounded or killed.

It was one of the deadliest battles in human history and J. V. Thomas was badly gassed during the Battle of Delville Wood in September. It was during the later months of this same year and in the spring of the next, in the Battle of Arras, that he was to win two medals – the French Medaille Militaire and the British Military Medal.

He was presented with both in 1918 while recuperating in Blackpool by Major General A. A. Sutton,  Commandant of the RAMC.  [2]  The French medal was awarded after heavy fighting in the Somme in November 1916 [3] and the Military Medal for conspicuous bravery in the field at the Battle of the Ancre on 28 and 29 April 1917 [4]

Thomas, who had been once again severely gassed some weeks before the presentation, was granted special leave to return to Camborne to visit his parents, James F. and Bessie Thomas, still running their business at 94, Trelowarren Street (this does not correspond to the current 94 as the street was re-numbered in the 1920s) [5].

It was not much longer before he was to return for good from the war. He was demobilised in early 1919.

Back in Camborne, the family business thrived.  J.F. and his eldest son, Wilfred, were experts at ‘graining’ – painting cheap wood to make it look like oak or other woods with a pronounced grain, as well as lettering texts for chapels such as the Ten Commandments.  Both were also skilled amateur artists. The shop survived well into the 1960s, run by Wilfred who usually had one of his landscape paintings exhibited for sale in the shop window.

On Boxing Day 1928, J. V. Thomas married Winifred Peller, a Camborne resident living on Trelowarren Street. His own career as an architect and planner was progressing and there was every reason to expect a promising career. He worked on the new housing built in the years after World War One in Manor Road, Camborne.

But he – like his brother Frederick Morley who had also been severely gassed in the war – suffered from poor health.

In 1939 at the relatively young age of 44, he was living in Truro and had been appointed to succeed a Mr E. H. Crispen as building inspector under Cornwall Council. But he died at the Brompton Hospital in London after an operation on 17 August 1939.

His obituary in a local paper reported that he had successfully carried out the duties of clerk of the works of the  North Cliffs drainage scheme and the Truro City Council drainage scheme as well as Manor Road, Camborne.

He had been due to take over his new duties at County Hall at the end of the month.

His widow in Truro and both his parents and three brothers survived him.  He is buried, like his brother Frederick Morley, in Centenary Methodist Chapel cemetery in Camborne.

His middle name, Vandersluys, lives on in the area. There are several families in Redruth with the surname, Vandersluys.  Gillian believes that the family owned a theatre in Amsterdam in the mid 17th century before emigrating: Cornish records show  one of the son’s occupation as a “dancing master”.

With thanks to Richard Devonshire for providing additional military background.